During the early hours of the morning, under the cover of darkness, an off-duty journalist reported and recorded, live via Facebook, construction workers cordoning off the area of the Skopje Supreme Court where Macedonian revolutionary Andon Lazov Kjoseto memorial statue was located.

Police surrounded the workers, advising all vehicular access was denied whilst the removal was in place. People were asked to move on, and the journalist recorded the removal of the statue.

Sources stated that this was the first of all the Macedonian statues that were to be removed and destroyed.

The Zaev administration is acquiescing to the demands of Macedonia’s bordering countries – in the systematic destruction of the Macedonian identity.

Recent events include the so-called “friendship “ agreements with Bulgaria, who demanded Macedonia change its historical documentation, in regards to the educational curriculum of schools. The Macedonian Orthodox church, which has been officially autocephalous since 1969, is also being pushed to be absorbed under Bulgarian diocese.

The dual language push to Albanian as an official language has also been implemented. Zaev secretive talks with neighbouring Greece sees this recent act of destruction of Macedonian heroes statues is further pandering to the agenda of neighbouring countries, not content to leave the Republic of Macedonia a sovereign nation.

This sets a very dangerous precedent to the division of Macedonia amongst its neighbours in 1913 along with the ongoing name negotiations.

World Macedonian Congress – Australia implores the President of the Republic, Macedonian governments, Members of Parliament to reject and nullify all name negotiations. Without name, religion, culture, identity, the Macedonian nation will cease to exist.

World Macedonian Congress – Australia also demands the Zaev government cease with the removal of historical statues, not only in Skopje but through-out the Republic of Macedonia, without the permission of the people first.   Unfortunately, our history is repeating, the government is embroiled in the treachery of the state and the nation has become deaf and blind, and the opposition party is missing in action. 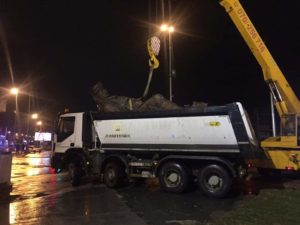 The Statue of Andon Kjoseto being removed from Skopje

By National Executive C0-Chairmen of the World Macedonian Congress- Australia, 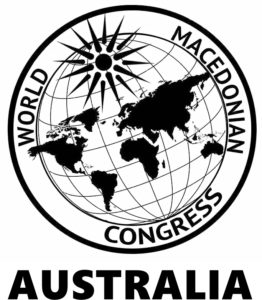