Macedonians, Our Precious Fatherland Macedonia Was Once The Most Glorious Country in the World.

On April 17th, 1880, the Ottoman government informed the Great Powers that the anticipated reforms had been drafted and prepared for their approval. Many Macedonian intellectuals, however, were not happy because the reforms neglected their demands, including the recognition of the Macedonian language.

In May 1880 about two hundred prominent Macedonians signed and submitted a request to the European Commission protesting against the Ottoman Constitutional amendments because, among other things, the Ottomans neglected to recognize the Macedonian language.

Unfortunately, their written pleas were yet again ignored so a Macedonian delegation lead by Karandzhulov was dispatched to meet with Lord Fitzmorris, the British representative of the European Commission. Even though Lord Fitzmorris met with the Macedonians in person and heard their pleas, the Commission still ignored their demands.

Dissatisfied with the way the reforms were carried out, particularly by the attitude of the Great Powers, Macedonian leaders began to look inwards to find a solution to their problems. A number of prominent leaders, including Leonidas Vulgaris from Berovo Region, Pop Kostandin Bufski and 30 others, got together and held a National Assembly from May 21st to June 2nd, 1880 in Gremen, Ostrovo Region (Aegean Macedonia).

Among other things, one of the items on the agenda was the Macedonian situation after the Berlin Congress. On this item, the Congress concluded that the reason Macedonia was given back to the Ottomans was that of the neighbouring propaganda, mainly that of Greece, Serbia and Bulgaria, which falsely represented the ethnic composition of the Macedonian population. The Congress came to the conclusion that once the foreign propaganda was exposed and neutralized, the Macedonian people would have a better chance of uniting behind a Macedonian cause and creating an Autonomous Macedonian state within the Ottoman Empire or creating a Macedonian independent state. 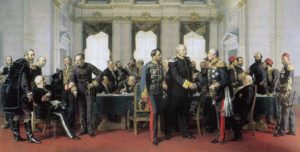 The Assembly also decided to challenge Ottoman authorities on articles 23 and 62 of the Treaty of Berlin which called for political and religious rights for the Macedonian people. If those rights were ignored then the Macedonians would have no other choice but to arm themselves and fight under the slogan “Macedonia to the Macedonians, for re-establishing Ancient Macedonia”. (Vanche Stojchev. “Military History of Macedonia”. Military academy. Skopje, 2004. Page 252).

The National Assembly was concluded with the formation of an executive authority responsible for carrying out political decisions under a Macedonian Provisional Government called “Unity” which was to represent all ethnic groups living in the territory of Macedonia. Vasil Simov was appointed President of the Provisional Government and Stefo Nikolov was elected President of the National Assembly. Pop Kostandin Bufski and Leonidas Vulgaris were given the task of organizing the Macedonian military.

Decisions made at this Assembly were communicated to the Great Power diplomatic missions in Solun which initially ignored them but later accepted them as the “Macedonian way” of dealing with problems.

On March 23rd, 1881, the Provisional Government of Macedonia approved a Manifesto and submitted it to the various diplomatic missions in the Ottoman territories.

The opening statements of the Manifesto began as follows:

“Macedonians, our precious fatherland Macedonia was once the most glorious country in the world. The Macedonian people have civilized Asia and mankind by the victorious Phalanx having laid the foundation of military arts, and Aristotle of education and enlightenment. Unfortunately, the once so glorious Macedonia today is on the brink of disaster because we have made mistakes and forgotten our past.

Aliens are now trying to take our country away from us and destroy our nationality, the brightness of which can never be darkened. Macedonia has become a poor widow abandoned by her sons and no longer flies the glorious flag it once flew in triumph by its victorious Macedonian armies. Today Macedonia has been reduced to a geographical term as if someone is attempting to extinguish its glory and send it to oblivion.

Intriguers are digging Macedonia’s grave and trying to destroy it by bringing in Austrian- Hungarian troops, but replacing the shackles of one with another will only destroy Macedonia. Macedonia will not be regenerated, and our nation will perish. This moment is critical for Macedonia- it is a matter of life or death.” (Vanche Stojchev. “Military History of Macedonia”. Military academy. Skopje, 2004. Page 253).

Realizing that Macedonia had become a pawn of the Great Powers, the Provisional Government of Macedonia called upon all the Macedonian people, regardless of religion and ethnicity, to unite and fight for liberation and the creation of an independent Macedonian state.

“True Macedonians, faithful sons of Macedonia! How much longer are you going to put up with the decay of our fatherland? Macedonia is calling you, crying out the words ‘You, my faithful children, successors of Aristotle and Alexander III of Macedonia, you who bleed with Macedonian blood, do not let me die, help me!’ What a sad sight it will be for you, genuine Macedonians if you become witnesses to my death. Do everything in your power, carry my flag of unity and call out the words ‘United Macedonia!’ Be brave, throw out those murderers who hold in their hands the flag of disunity and divide you, my children of various ethnicities.

Gather under the flag of Macedonia, raise it high and write on it unanimously: Long live the Macedonian people! Long live Macedonia! Let them hear the voice of our fatherland; let us gain liberty, the most precious heritage of nations. Say these words, for the liberal people who will applaud you. Call their noble hearts to hurry and give their help, to join your Holy fight for liberty, which has been away from our precious country for so many centuries. Macedonians, think about our origin, and do not give it up.” (Vanche Stojchev. “Military History of Macedonia”. Military academy. Skopje, 2004. Page 253).

The Manifesto was signed by President Vasil Simon, secretary Nikola Trajkov and three other members of the Provisional Government of Macedonia, Petro Jovanov, Kosta Bufski and Hriste Gorgov. The signatures were confirmed by two government seals and on April 11th, 1881 and the Manifesto was taken to Kjustandil where the transcript was translated to Russian and French and distributed to various foreign and domestic diplomatic representatives in Constantinople. 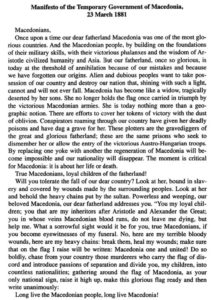